{}
Copyright © 2021 Dubai Police, all rights reserved
This site is monitored and maintained by Dubai Police
The site is best viewed using IE11 and above, Mozilla Firefox, Safari and Chrome
Last modified Date: 28-11-2021 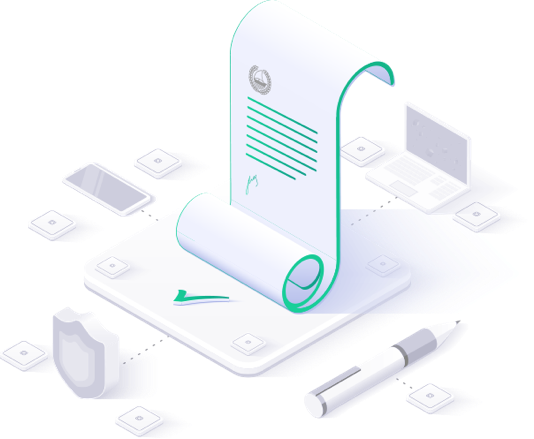 Planting One Million Trees An initiative to improve the ecological footprint index: 14/02/2011

When passing by the Dubai Police Academy, in the Umm Sequim, you cannot imagine that behind those walls students and directors, who are working, in their spare time to increase the green areas. An area of more than 50% of the total area of Academy, represented by the farms of approximately the 2000 Palm, and trees of multiple types.

The green area includes 150 trees of citrus fruits and mangoes, and 1000 of Ghaf trees. The project is reflected in a nursery group, which the Academy is working to accomplish. The first nursery was launched in the recent period, under the initiative of «Planting one Million Trees», in Dubai. 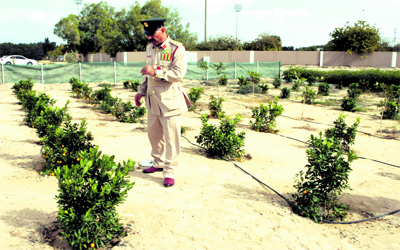 The Director of Dubai Police Academy, President of the Supreme Committee of Zayed International Prize for the Environment, His Excellency Major General Mohammad Ahmad Bin Fahad, said; to the newspaper "Emirates Today": "The initiative includes planting trees that achieve the desired objectives. It is to improve the ecological footprint index, in the UAE, and highlight the commitment to the prevention of the effects of climate change, and to give an aesthetic cultural landscape and enhance the health of the environment, and spread the environmental awareness, and strengthen the culture of green development".

He added: "The initiative contributes to providing a buffer zone to the wind and to help break its strength; prevent trails of sand on the roads and urban areas; contribute in providing an appropriate environment for the stability of the weather. It also contributes to preventing of transmission of air pollution; encouraging and stimulating planting trees, at all levels; dissemination of the initiative at the national, regional and international levels, under the umbrella of the United Nations project to plant one billion trees in the world  He pointed out that the interest of Dubai Police Academy to increase the green areas, stems from the policy underlying the Dubai Police since its inception, and which deals with sustainable development, through the interest in agriculture and promotion of environmental initiatives; with the supporters of the Green Environment. He mentioned that the percentage of green spaces in all police facilities have risen to 30% at the Headquarters, and a total of green areas of five million square feet in various departments and police stations in Dubai.

He added: " Some do not realize that some members of the Dubai Police Academy, with different functions and positions, are working in their spare time to expand its green areas which, beyond its academic benefits, it includes institutions and members of the community". He said: "The project is reflected in several nurseries and the first was launched by Commander in Chief of Dubai Police, His Excellency Lieutenant General Dhahi Khalfan Tamim, within a system of measures, aimed at activating the initiative "Planting One Million Trees", in Dubai, which was launched last November.
Bin Fahad pointed out that the Academy is currently working to complete the second nursery, in a series of seven nurseries, which seeks to launch, in order to accomplish the initiative of «Planting One Million Trees», in four years. The aim is to plant 250 thousand trees every year, in collaboration with government departments and institutions concerned about the environment. That would crown the Academy tireless efforts in the field of community work.

The Director of Dubai Police Academy said: "Dubai Police started the attention to the environmental at early stages. It recorded major initiatives of the protection and development of the natural environment, such as planting mangrove trees in the Ras Al Khor, which later became a nature reserve; recognized internationally, in addition to the initiatives of air pollution control; by reducing traffic congestion, adjust the specification and maintenance of vehicles to reduce exhaust, and control of marine pollution. Other initiatives include energy conservation and reliance on alternative energy, which seeks to preserve the environment".